The Home Ben and Katie Built 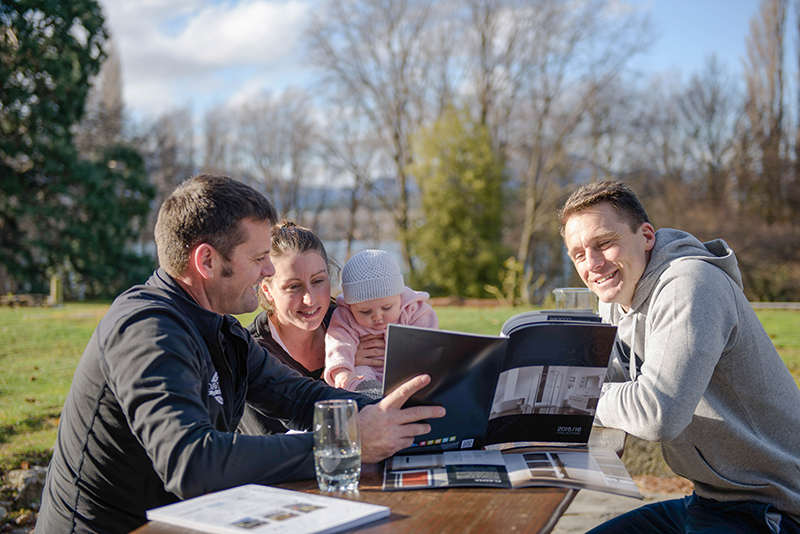 “We knew that we would be overseas for much of the build and it was important to know that we were working with someone with the experience needed to get a really top-quality job done and who could provide a safe pair of hands,’’ Ben pointed out.

“For Katie and me it was about having a place that suits us. We’re outdoor people, we were married here and it is our kind of place. It will be great to have a base here — a place where we can come to kick back, relax and really enjoy.”

Ben and Katie had been enjoying Wanaka together for the past four or five years and for Ben it had been a place he had regularly returned to for more than a decade — as both an adult and a kid.

This Christmas they will be back there — this time in their new holiday house and although the build has had the tightest time frame of just about any that Chris Leith has been responsible for, all will be ready.

Chris and Tracey Leith’s building experience spans more than 22 years, nine of which were spent as owner/operators of the David Reid Homes Southland franchise before they took over the Wanaka and Central Otago David Reid Homes franchise at the beginning of this year.

Their commitment to excellence has resulted in them building a fine reputation for both quality and service. Their partnership has produced many gold award-winning homes, several national finalists and national award-winning homes among other accolades. Despite his depth of experience, Chris looks on the build of Ben and Katie’s house as “pretty special’’ in that it will the first he will have completed in Wanaka.

“They are also a magic couple and extremely easy to work with, keeping up communication throughout the time they were overseas for the World Cup.”

“Both are passionate about the building process and they, along with Greg Booth, of Otago Design, Andy Wavish, our contract builder in Wanaka and all the sub contractors have worked as a cohesive team which has made for a smooth process despite the tight time frame.

Interestingly it was earlier in the year when the couple were seeking a section on which to build that Chris and Tracey first became involved.

“We inspected available sections together until we found one that would suit Ben and Katie’s requirements, which included privacy. Plans for their new home then began.’’

The single storey 220sqm holiday home is based on one from the David Reid Homes’ Smart Solutions plan range. This has been adapted to the section and to Ben and Katie’s lifestyle and budget.

With its open-plan living spaces and four bedrooms it is described by Chris as “of simple design with a classy, classical feel’’.  There are two bathrooms, the second an ensuite off the master bedroom. While the bedrooms and hallway are carpeted the timber overlay flooring in the kitchen and living areas makes for easy-care living synonymous with a holiday environment.

The scissor-trussed ceiling in the lounge, finished in T & G panel board gives the impression of space.

This is a home peppered with thoughtful features. “We looked at the overall envelope of the building to make best use of passive solar heat and tick the energy-efficient box to keep running costs down.’’ Chris explained.

Large windows and doors are a feature as is the MaxRaft fully-insulated floor, and the slightly over-sized 6x2 framing makes way for wall and ceiling insulation well above industry standards.

To complement the heat from a wood fire in the lounge, a ducted heat pump system takes heat to all areas of the home. Wi-fi controlled, it can be turned on in Dunedin so that the house is toasty warm by the time the Smith family arrive three and a-half hours later.

A ventilation system exchanges the internal air with fresh air from outside with minimal heat loss and making way for a healthier home.  The above standard 2.2m high internal doors encourage airflow from room to room and also give the illusion of space.

Other extra design details include the use of the roof space for storage. With strengthened flooring to carry weight it is complete with a drop-down ladder into the hallway for easy access. “This means, luggage, water skis and snow skis need not be stored in the garage,’’ Chris pointed out.

And this is no run-of-the-mill garage either but rather a garage/games room, wired for television and featuring a fully insulated garage door and walls and special carpet that is as appropriate for vehicles as people.

The exterior of the home is a light-weight aerated concrete plaster for minimal maintenance broken by cedar shiplap weatherboard detail.

Fibre cement board has been used for the garage.  Outdoor living was also a major factor in the planning, this includes ways and means of curtailing the wandering ways of Charlie - Ben and Katie’s dog.

The answer lies in a sheltered patio and courtyard with poured in situ concrete walls and glass balustrading to create a contained outdoor living area suitable for both Charlie and the couple’s little eight-month-old daughter Annabel. A barbecue and outdoor fire help create that Wanaka holiday feel.

Greg Booth described the colour scheme as conveying “a light and airy holiday feel with a retro spin’’ that harks back to the original Wanaka cribs. Neutral paint tones complement the natural cedar timber incorporated into the exterior cladding.

He also pointed to the timber floors of the living areas which introduce a slight Scandinavian influence.  Minimalistic and clean-lined, the scheme provides a backdrop for colours that will be introduced by way of furniture, furnishing and accessories.

Greg, incidentally also worked with Katie and Ben on their Dunedin home.

For Chris the Wanaka build has had its challenges because if the time factor. But it also has been an exciting and satisfying project, which has been guided by his astute stewardship.

“At the beginning of August we pushed 'play' and maintained close contact with Ben and Katie by way of photographs of the progress during the time they were overseas. They’re home now and we’re confident that they will see the majority of work finished by the end of this month and they will be enjoying their new Wanaka house with family and friends for the festive break.”