Home of the Week - Waikato 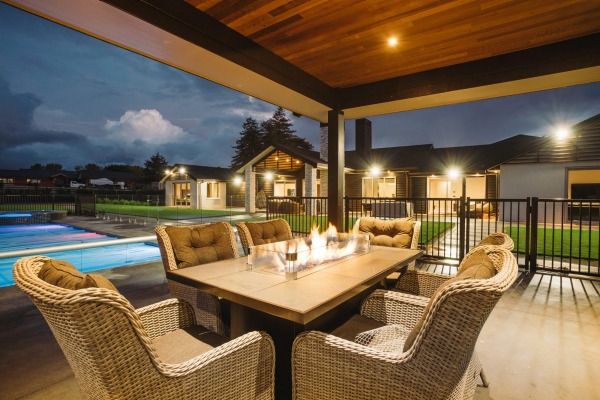 When you have a small site, building a new home is an exercise in constraint – there's not a lot of room to manoeuvre design-wise.

But the opposite applies when you have an extra-large site, which was the case for the owners of this new house on the outskirts of Hamilton.

Being new to the whole design-and-build process, they readily accepted changes as the project progressed. So this became a house that "evolved" to give them every modern convenience – on a 5095 square-metre section.

Ben Green, managing director of David Reid Homes Waikato, says the owners approached the company after visiting one of its show homes.

"They had a plot of land and wanted us to look at the site before the sale went through, as part of the due diligence. They were keen to build a house using similar materials to a show home we were designing for Hukanui Road."

Green says the design brief was specific in terms of the living areas and bedrooms, but more open when it came to aesthetics. "They gave us a budget and we worked backwards from that. But this was a project that grew as it went along – the media room, gym and pool were later additions to the plans, and this was how the property gradually took shape."

The couple say they wanted a contemporary home that wouldn't date.

"We didn't want an Art Deco look or ultra-modern architecture, and we didn't want a house that looked 100 years old," says one of the owners.

Architectural designer David Irwin pulled together the disparate elements to give the home a strong identity. The entry is clearly defined by a cedar-lined portico supported by schist manufactured-stone columns. The schist continues inside where it forms a feature wall opposite the entry.

Other building materials include bagged brick, which is painted white, and black Triclad weatherboards manufactured in Cambridge.

On the interior, the home has an easy flow while still providing a good separation between living areas. The couple can be entertaining friends in the main living space, while their sons do their own thing in the games room.  Bedrooms are also separated, so the parents have their own retreat, and there is a separate guest wing that could accommodate elderly parents in the future.

But it's the "extras" that come with this house that spell the difference. "The home theatre is probably our favourite room," says one of the owners.

"The room has skylights but no windows, because we wanted to be able to watch movies by day as well as night. There are automated louvres and blinds for the skylights so they can be closed to block all the light."

And the resort-style outdoor living areas, just made for entertaining, include a pool with integrated spa, a tennis court and basketball area.

In addition to a covered alfresco area with a gas fireplace, there's a self-contained pool pavilion with an outdoor kitchen with refrigerators, sink and barbecue cooking facilities. The table in the pavilion has its own gas fire for warmth – the gas is piped up through the middle of the table.

The owners say they appreciated the easy communication with the builder. "It's one thing to have a plan on paper, but once you start building, things can change, and we were always open to suggestions on ways to improve things. We were also happy to let the build progress at its own pace, without rushing the process, and that has certainly paid off with a better finished product." Favourite part of the house: It would have to be the home theatre (both parents) and outdoor facilities (sons).

Best decorating finds: The 1.8m-diameter clock and chandelier in the entry, from ECC.

Best part of the building process: Great communication and working close to the site, so I could pop down to talk over things with the builder.

Advice to others building: Be open to suggestions from the experts, and don't rush the build – you will get a better result if you let things happen in the appropriate timeframe.

In hindsight: While we love the size of the master suite, we would probably make the other four bedrooms a little smaller, and not square.

Best time of the day: All day long. It's beautiful and quiet here first thing in the morning, and that doesn't change right through the day. Summer evenings are especially lovely outdoors.