Home of the Week: Kaiteriteri 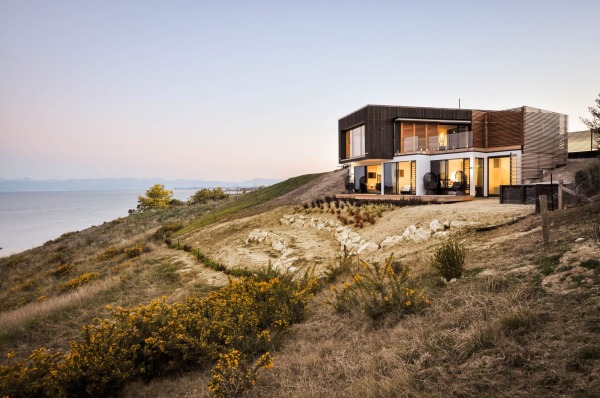 Regular as clockwork, the sea breeze picks up at 10am every morning and it's a bit cool on the ridge above Little Kaiteriteri, even in the summer. But so long as you have a house designed to cope, it's not a problem.

Providing shelter from the breeze was just one of the challenges of this build by Paul Richards of David Reid Homes in Nelson. The steep site and lack of privacy added to the difficulty.

But strangely enough, having absentee owners who live in the UK was not a major problem.

Sue and Tony Sanders had sold a holiday home in the area and weren't sure they were even going to stay – until they saw this site and fell in love with it. They gave a set of "essentials" to Richards, and then left it to him to "get creative", knowing from experience that they could trust him to deliver.

Richards says the design process starts on site. "When I am there I usually get a bit of a vision, and a feel for what might work and what might not. For this site, it made sense to fit the lower level of the house into the contours of the land and then position the upper living floor at an 85-degree angle to maximise the view and the sun throughout the day." The offset upper level means the sun reaches the sheltered west deck early, but the view is not sacrificed as there's a sightline right through the house.

This deck, in particular, is a hub for entertaining. "Outdoor living was incredibly important to us," says Sue Sanders. "We do a lot of entertaining and wanted the house to flow for indoor-outdoor dining. In fact the entire house is all about a seamless flow from one area to the other."

The alfresco area can be fully enclosed with louvres, semi-enclosed or fully open. It includes an outdoor kitchen with a sink, barbecue and refrigerator.

Richards has also incorporated some innovative ideas to give the owners privacy. Slatted timber screens at the front and side of the house are more densely positioned towards the top so the indoor and outdoor living spaces are not overlooked by the higher neighbouring properties and people on the street. But the owners outlook is not compromised, because their view is at a lower level.

Minimising the visual impact of a large house on the hillside was another priority for Richards, and it was the reason he advised a dark-painted cedar box for the upper storey. "I envisioned the top volume as a long, black 'sausage' that floated at an angle above the base of the house. Because it is painted black it becomes recessive visually – if it was white it would have been really imposing. We painted the garaging white to enhance the sense of separation from the 'black sausage'." The black and white palette continues on the interior, where it features in the central kitchen. "We added a little lighter veneer to the cabinets to anchor the kitchen," says Richards. "It makes it a little bit organic, and not quite so sharp."

The builder says that although the build was difficult, it helped that the absentee owners had the same vision and were very trusting. "They left it to evolve to a degree," he says. "But we were in sync right from the start."

Sue and Tony Sanders agree. "Paul has done a cracking job," says Sue. "He gave us a home that is delightful – so much so that we don't want to go back to the UK."

The house has also been picked as a winner by the judges in the Registered Master Builders 2016 House of the Year Awards, winning it's category and a Gold Reserve Award in the regional competition, qualifying to participate in the awards at national level. Best time of the day: There isn't one – it's just gorgeous right through the day. (Sue and Tony)

Favourite space: Hard to pick, but standing at the kitchen with the cantilevered window and looking out over the beach towards Nelson is lovely. (Sue)

Most inspired decision: Letting Paul Richards from David Reid Homes do the house. He was great to work with, and no-one else would have achieved this quality. (Sue and Tony)

Best part of the house: The way it all flows, in terms of the space, movement and light. Nothing aggravates. (Sue)