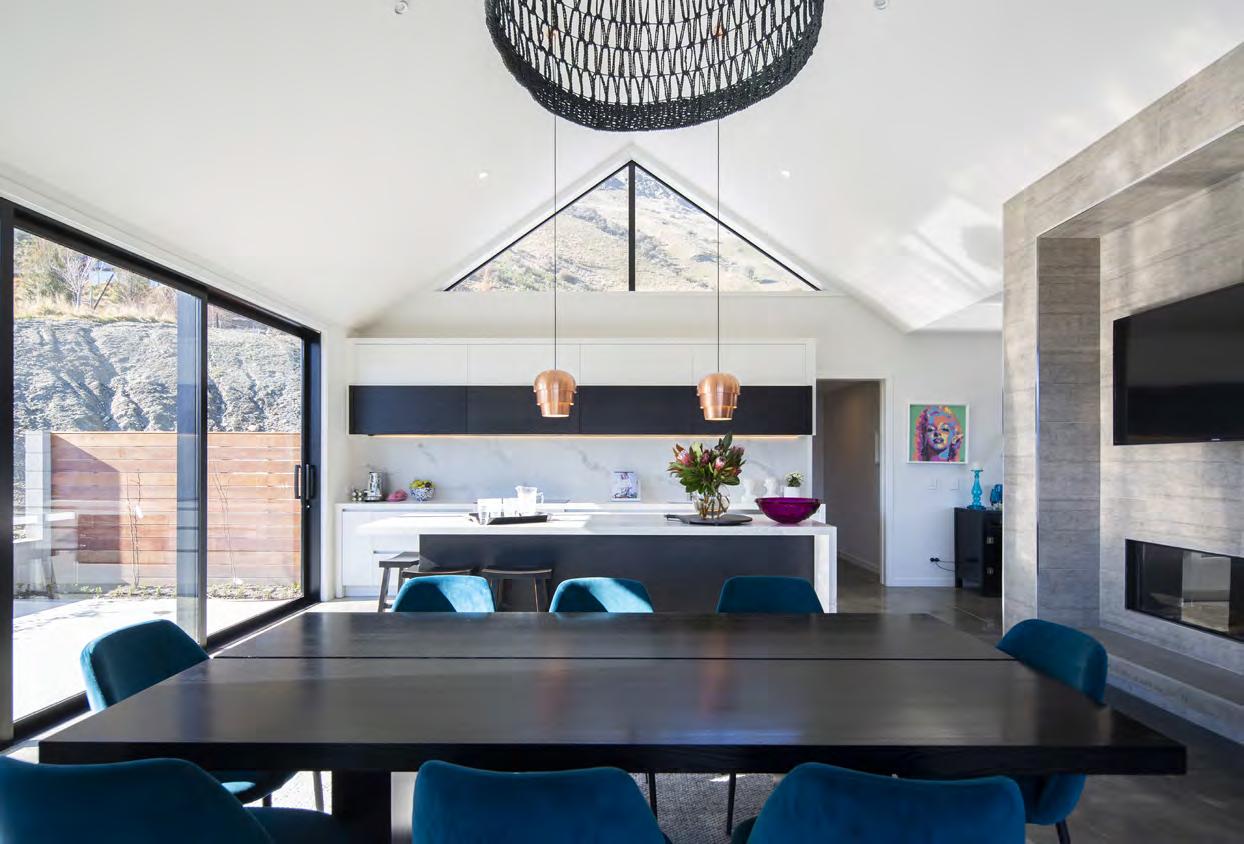 When Tony and Ginny Wilkins’ son comes home for university holidays, like any typical young man he heads straight for the fridge. What’s not so typical is the way he gets there: “He skateboards on the concrete floors from his bedroom – and gets annoyed if I put any rugs in the way,” laughs Ginny.

The Wilkins, a farming couple, moved to this idyllic enclave overlooking Lake Hayes in their semi-retirement, to a place they had always holidayed. The landscapes were awe-inspiring and felt familiar but they grew frustrated in their search for a house to buy. Instead, they decided to take the plunge and build, and once they discovered this 8000-square-metre site in a boutique development on a hill facing north, they didn’t hesitate. “We loved it straight away,” says Tony.

The couple has vivid memories of the only other time they built – a barn-like dwelling on their farm near Gore. They were just starting out and money was tight so they contracted the construction company to complete the home to shell stage. “We had a small baby in tow and did everything else ourselves, including installing the plasterboard walls,” says Ginny.

This time they had no such intention of mucking in but that doesn’t mean they didn’t want to be involved.

In fact the pair is the perfect team: “I’m a practical sort,” says Tony, “and Ginny has a great eye for design. So it was important to us that we felt really comfortable with the designers, builders and tradies.”

A visit to the David Reid Homes show home at Jack’s Point convinced them they’d found their people. “We were instantly impressed by the quality and loved the enthusiasm of the local franchisees,” says Tony.

The company suggested a number of architects to the couple and they went with Martin Hofman who responded to their brief to make the most of the view and the sunlight. Together they stretched a series of three pavilions 48 metres along the section. The gabled forms are like a mini miner’s village that key into the vernacular architecture of the Central Otago region. Clad in dark-stained cedar teamed with steel-tray roofing in a charcoal tone makes for a low-key presence that melds with the drama of the bare hills.

Although the section had the right orientation and a million-dollar aspect, there were challenges. It was fairly narrow and steep so it took longer than expected to establish a stable platform that the engineers were happy with. The David Reid Homes build team guided them through this hiccup. “The builder is a Southland boy so we instantly clicked,” says Tony. One upside was they gained more flat ground for outdoor living. Twelve months later they were in residence: the cats that got the cream. This is a dwelling that opens its arms to the elements yet also has an internal focus that makes it homely in an instant. The main living pavilion and master suite are set at right angles to the lake and between them is sandwiched a bedroom pavilion that lies parallel to the water. Raked ceilings echo the faraway peaks and bring incredible volume to the spaces. To the north, glazed fronts usher in the gasp of view while to the south, clerestory windows look up to the sharp rise of Morven Hill.

In the rooms themselves there is plenty to catch the eye. “We like to collect art so specifically asked for a hallway that connects the pavilions like a gallery where we can hang our treasures,” says Ginny.

She was also instrumental in the design of the kitchen, working alongside Rachel Barnes from Ingrid Geldof Design. Here near-black timber cabinetry is offset by a pristine-white island bench in Caesarstone and the handles are hidden along with any mess. “I’m a keen baker so a scullery was a must,” says Ginny, who loves how the copper pendants bring the texture of another natural material into play.

She’s clearly a fan of colour too and is not afraid to use it. Against white walls and those concrete floors, a warm blue sofa peps up the palette and this same shade has been picked up in dining chairs. The mustard-gold tone in a sofa opposite also features on a wall in the main bedroom along with tiles that enhance the en suite.

A judiciously placed mirror in this bathroom reflects the distant frosted peaks so that bathing beauties needn’t miss out. “There’s nothing quite like a glass of Champagne and some bubbles in your bath when it’s snowing outside,” says Ginny. This is just one of life’s everyday pleasures in this special retreat and it’s no wonder the Wilkins seldom find themselves home alone. The house is built for two and equally for entertaining, and they often have family and friends to stay. Come summer or fall, there’s always a space to engage with, whether that’s plunging into the spa pool to send Jack Frost packing or gathering in the shelter of the sunken fire pit for the chance to throw meat or marshmallows over the coals.

While Tony can only praise the seamlessness and synergy of the end-to-end process, Ginny loves the function and the form of this home. “I can’t fault the design. Every day I wake up and can’t quite believe I am living here.”

The Wilkins love how warm this house is and, in this extreme environment, that was a priority. Here are their tips for turning up the heat…

The foundation is fully insulated using a MaxRaft system. It also has underfloor heating installed within it powered by electricity, which involves a heat exchanger that heats piping full of water and runs throughout the slab. It is thermostat controlled to maintain the desired interior temperature. Using large double-glazed windows and sliding glass doors made the most of the stunning views while providing highly efficient insulation.  The house is a north-facing sun trap. Gas water heating is unlimited and immediate and allowed more floorspace within the interior because there was no need to plan for water cylinders. There are two gas califonts - one for each end of the home.  Smaller, longer windows on the southern side of the house allow air flow if needed during summer heat. You can create a cosier feel by using warm colours, carpets and lots of rugs. Ginny has a slight addiction to sheepskins!